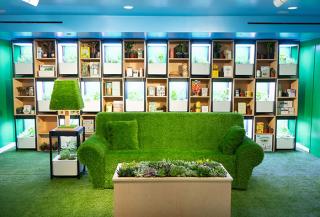 Macy’s is celebrating the great outdoors — with a little help from Dick’s Sporting Goods and Miracle-Gro — in its latest experiential store concept.

The department store retailer has added Outdoor Story shops to 36 locations nationwide. The shops are the second iteration of Story at Macy’s, and come about 14 months after Macy’s acquired Story, the experiential Manhattan retailer that reinvents itself with a new theme every couple of months.

Macy’s collaborated with Dick’s and Miracle-Gro on Outdoor, which is focused on entertaining, bringing the outside indoors and recreational activities. The theme is explored through a mix of curated merchandise from more than 70 brands and community-focused programming. Over the span of two months (Outdoor runs until September), Macy’s will offer more than 250 events, ranging from indoor gardening workshops and terrarium-making classes to outside activities such as kayaking on the Hudson River.

The merchandise includes a highly curated mix of apparel and hard goods from Dick’s private brands, Alpine Design and Field & Stream. It’s the first time the two brands have been available at a retailer outside of Dick’s. Also featured is a newly launched indoor growing system for growing a wide variety of foods and herbs indoors from Miracle-Gro.

“We see this retail collaboration between Macy’s, Miracle-Gro and Dick’s as a way to showcase how three very different American-made companies can come together to create a unique shopping experience for all customers,” said Ed Stack, CEO and chairman of Dick’s Sporting Goods.

The themed shop concept furthers support the Macy’s brand experience team’s ‘test and learn’ approach via a variety of cross-merchandising strategies and event programming that showcases the community of each brand, the retailer said.

“We want to show both consumers, as well as businesses, that collaboration is the new competition; bringing together brands as storytellers to add authority and authenticity to a subject matter, like we are doing with Dick’s and Miracle-Gro, benefits both the customer and the business,” said Rachel Shechtman, Macy’s brand experience officer and founder of Story. “The timing felt right to lean on each brand’s respective strengths to empower new modes of collaboration and learning.”

Similar to Macy’s first Story shop, Color, which ran from April 10 to June 26, the Outdoor concept was designed by David Stark Design, with the goal of taking customers on an outdoor adventure through lush greenery, playful landscapes and Instagram-friendly moments.