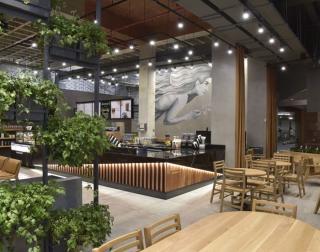 Starbucks has extended in footprint in Latin America.

The coffee giant has arrived in Uruguay, with its first store opening in the capital city of Montevideo. A total of five locations are expected by year end.

Starbucks first entered Latin America in 2002. Currently, there are more than 900 Starbucks outposts throughout Mexico, Colombia, Argentina, and Chile. The stores are owned and operated by multi-brand restaurant operator Alsea, which will also own and operate Starbucks stores across Uruguay. The opening in Uruguay marks Starbucks 77th global market, and 18th in the Latin America and Caribbean region.

“Our first store in the beautiful country of Uruguay marks a key milestone for our expansion in Latin America,” said Ricardo Rico, Starbucks general manager and VP for Latin America. “We want to thank the community for this warm welcome and celebrate our journey to Uruguay with our longtime, trusted partners at Alsea.”

The new store is designed to drive connections between Starbucks’ customers and employees, while honoring the Montevideo city and its culture. Exposed concrete columns and ceilings bring character and texture to the space, which is accented with custom leather, a material with great local relevance, designed to evoke a warm ambience. A green living wall with local plants connects the store to the origins and environment of a coffee farm.

One of the most striking features of the store is a large mural painted by a local artist from the city of Montevideo. The mural depicts Starbucks’ signature Siren over a concrete finish.
Advertisement