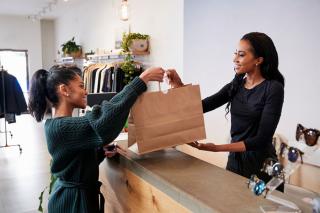 That’s according to a recent ICSC study, “The Halo Effect: How Bricks Impact Clicks,” which found that opening a physical store leads to a 37% average gain in overall traffic to a retailer’s website and increases its share of web traffic within that market by an average of 27%. The opposite is also true as web traffic tends to fall when stores close.

The “halo effect” – commonly defined as the tendency for an impression created in one area to influence another – is radically transforming how retailers do business and innovate, according to ICSC.

“The clicks versus bricks debate is over,” said Tom McGee, president and CEO of ICSC. “We have long suspected that there is a direct and positive correlation between having both a physical and a digital presence, and the Halo Effect study confirmed this. What we are seeing now is a retail renaissance as both new and established retailers are investing in their stores and reinvigorating their physical presence.”

The study, the largest of its kind, found that physical stores have a material effect on the success of a brand not just through sales, but also in driving market performance and boosting customer perception. Customers in markets where emerging retailers have stores tend to consider those brands 69% of the time, versus 51% in general.

“The physical store is the hub of customer experience and service,” McGee continued. “Consumers today want to choose where and when they shop. Retailers that innovate and create a true omnichannel experience, leveraging the strengths of both physical and digital, will thrive.”

As physical stores act like “billboards” for brands, retailers can use both these stores and online retail to drive traffic to each other. When and where stores exist, consumers tend to use them: 84% of shoppers either shop exclusively in store (53%) or in combination with online (31%).

The report explores, and quantifies, how physical locations impact a brand’s digital presence, why that relationship matters, and why physical stores are essential to any successful retail strategy.

The full report can be downloaded here.
Advertisement