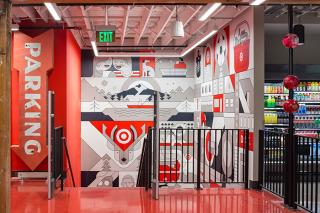 A small-format Target store in Portland, Oregon, was named Store of the Year in the 48th annual Shop! Awards, which honor the best in retail design around the globe.

The 32,000-sq.-ft. store features a nostalgic design that pays homage to its location in a former 1950s-era bowling alley building. It was tailored to fit into — and serve — the local Powell Street neighborhood. Judges were impressed by the way Target's brand and design sensibility were merged seamlessly into the unique environment of a neighborhood landmark. (Skanska served as general contractor for the store, with Target responsible for architecture and design.)

Also taking top honors at the annual Shop! Awards Celebration were Roots (Legends) on Newbury Street in Boston, for Visual Presentation of the Year, and Samsung Experience, at CF Toronto Eaton Centre in Toronto, for Fixture of the Year. The Samsung store also was honored with awards in storefront/exterior and lighting.

During the awards celebration, top winners were named in three annual Shop! Awards competitions: Design Awards, OMA Awards and Global Awards. An independent panel of judges for the Design Awards selected 54 finalists this year: 17 Gold, 16 Silver, and 18 Element winners, as well as the top three. For full coverage of the 2019 award-winning projects, including photos, visit shopawards.org.
Advertisement