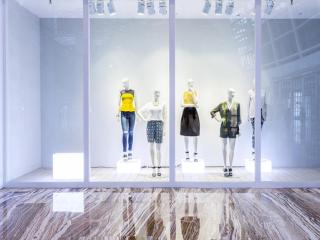 As the planned store closures by Starbucks and Chipotle makes clear, the pendulum certainly seems to have swung away from the growth of store counts simply for growth’s sake. With traditional retail rollout models in their waning days, here are a few considerations to keep in mind:

One Size Fits No One
One of the most debated causes of the recent retail closure epidemic is that of earlier over-expansion in the decades that preceded it. According to the International Council of Shopping Centers, the number of shopping malls grew by over 300% from 1970 to 2016. As mall counts grew, so too did store counts for their specialty retail and department store tenants.

Many retailers (and their design or architecture partners) were challenged with quickly creating and replicating a physical brand experience that would literally allow them access to new markets. Especially considering the availability of first-generation real estate during this time, speed to opening became the most important metric for success. Efficiency was often achieved through a modular, prototypical kit-of-parts that could be replicated in a copy-and-paste manner as new locations were planned.

As some organizations are now reining in their store exposure, that definition of success has been forced to adapt as well. With e-commerce’s explosion, stores aren’t just points of transaction, but a potential touchpoint in a larger customer journey.

The consolidation of a retailer’s presence means individual stores have to do more heavy lifting than ever to deliver the desired brand experience. Where speed was once the primary goal for any rollout effort, the notion of nuanced, site-specific design sensitivity is becoming just as prevalent.

For many, quality of experience has overtaken quantity of experience. As individual stores are now assessed more critically from their brand contributions (beyond just transactions), this can stretch the limits of even robustly tiered store prototype programs.

Seizing Localization Opportunities Early
One of the major tactics some retailers are using to create the site-specific design sensitivity mentioned above is the localization of their store experience to the community it serves. Even if fixtures and overall aesthetic often need to remain mostly consistent, there are strong opportunities for adding some local “special sauce” to an individual store location.

Emerging brands are perhaps especially at an advantage when it comes to localizing their store experiences. Brands in a growth mode can be more deliberate about the markets they want to target without the same sunk cost implications that large fleet retailers have to rationalize. They can also better earmark the elements of the store experience that they would like to align locally, versus those that need to remain uniformly the same.

Graphic systems remain an ever-flexible route for adding nuance to individual store locations. These can even be sourced at a local level or in direct collaboration with local artists. During Mod Pizza’s considerable expansion in the last half-decade, the company has retained a signature “Wall of Fame” element in most locations which displays photos and messages submitted by members of the community. Other interior design features and location-specific photography are (in most cases) drawn from local partnerships.

Beyond graphics, material selection and unique, site-specific architectural elements offer other options for localization. Holler & Dash, for instance, is an emerging chef-driven, fast casual biscuit concept from Cracker Barrel. The company is plotting its course for broader growth, and has opened several locations in the last year. One of these locations is in West Midtown, Atlanta, near the former Westside Ironworks foundry.

The interior of the space utilized a number of brand-consistent features like exposed brick walls, legacy window frames, and poured concrete flooring. To better localize the unique location, though, an I-beam and railroad tie inspired front porch were created to celebrate the industrial origins of the community.

Balancing Exposure with Experience
For mature retailers with a large base of existing stores, localizing every single location would likely be a cumbersome endeavor with harder-to-quantify ROI. The selective deployment of elevated “flagship light” experiences, however, can be used to signal a particularly strong commitment to higher-priority markets.

T-Mobile, for example, has greatly increased their overall store footprint in recent years – oftentimes through expansion of independent, licensed store outlets. In parallel with some of this more traditional growth, though, they have also opened a half-dozen “signature stores” in high-profile destinations that include New York City, Chicago, Santa Monica, Miami, San Francisco and Las Vegas.

All of these stores offer an immersive T-Mobile brand experience, but each one has been uniquely designed to celebrate the respective cities that they serve. While the Times Square location takes advantage of large, exterior digital elements, for example, the smaller store in Miami Beach features an Art Deco façade to fit into local surroundings. Likewise, the Las Vegas store features a photo booth and concierge desk that feel right at home with amenities in resorts on the Strip.

As a result, T-Mobile has not only achieved steady growth of its baseline store fleet and subscriber count, but created a few major splashes that have driven press, industry accolades and a more apparent commitment to their “un-carrier” brand proposition.

Robert Ausdenmoore is an associate director in FRCH Design Worldwide’s specialty architecture studio. His primary areas of focus include the development of national due diligence, site survey and prototype implementation programs.
Advertisement