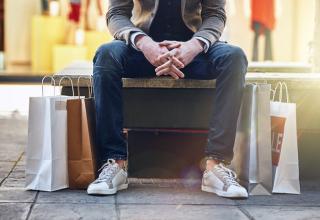 Men are shopping more frequently in-store and online than women according to a new report, The Arrival of the New Male Power Shopper, by global technology firm First Insight. The company, which surveyed consumers on shopping habits, purchase behavior and influences driving decisions, found that 53% of men reported shopping on Amazon six or more times a month, compared to only 45% of female respondents.. Further, 60% of men (versus 52% of women) say that their Amazon purchases have increased in the last year.

The data reflected a similar trend across traditional retail venues. Twenty-five percent of men versus only 15% of women reported shopping six or more times a month at mass department stores like Kohl’s or J.C. Penney.

“We are seeing a significant shift in shopping behavior by men, which is shattering many age-old gender stereotypes,” said Greg Petro, CEO of First Insight. “Men are now shopping more and increasing the frequency of their online and in-store purchases across the board, which is also beginning to outpace women in many categories. It’s clear that as we head into 2019, every retailer needs to shrug off the misperception that shopping is a female-dominated activity, particularly as more men leverage the latest technologies and online tools to find the best prices.”

Similar trends were seen when evaluating consumers who shop other retail categories six or more times a month including:

• Off-price stores like TJ Maxx and Marshalls: Twenty-four percent of men versus 19% of women.

• Online discount retailers like Gilt, 6pm and The Outnet: Nineteen percent of men versus 8% of women.