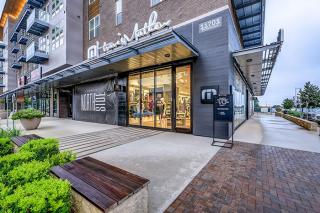 TravisMathew has opened its doors in Texas.

The Southern California-based men’s clothing brand has made its Texas debut at the Domain Northside center in Austin. It’s the company’s ninth store to date, with an additional location set to open in Plano, Texas, later this year.

Similar to TravisMathew’s other retail stores, the Austin location is experiential, with modern architecture and such in-store entertainment features as televisions playing sporting events and a vintage table-top video game console. There is also a glass ping-pong table.

Founded in 2007, the brand designs and sells premium men’s apparel for work and play, drawing inspiration from Southern California’s culture and lifestyle. TravisMathew clothing is sold online and in over two thousand stores, including department stores, such as Nordstrom, country clubs and resorts.

“The Texas market has been integral in the growth of TravisMathew outside of Southern California,” says TravisMathew co-founder and CEO, Travis Brasher.
Advertisement