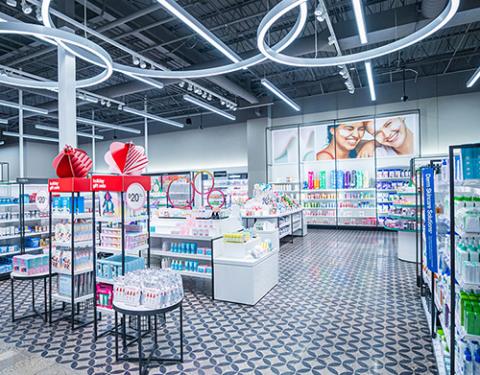 Target Corp. continues to grow faster than it did before pre-pandemic as the discounter reported second-quarter earnings that beat analysts’ estimates, with sales increases across all its merchandise categories.

The discounter said that back-to-school spending got off to a strong start in the quarter and was continuing, with backpacks, lunchboxes and school uniforms all selling well.

"Traffic has been very consistent and it has been consistently strong and we are very excited about the early momentum in back-to-school and back-to-college as well," said Christina Hennington, Target's chief growth officer, on the company's quarterly call with analysts.

Target, whose second-quarter profits were nearly double those in the same quarter of pre-pandemic 2019, also raised its forecast for the year. On a call with reporters, Target CFO said the raised forecast “reflects our confidence in Target’s ability to continue putting profitable growth on top of profitable growth — even in a volatile environment.”

Sales up 9.5%
Revenue rose 9.5% to $25.16 billion, topping estimates of $24.99 billion, compared to growth of 23.3% in the first quarter. Apparel sales grew at a double-digit rate, with essentials and beauty in the high single-digits. Food and beverages delivered low double-digit growth,

Same-store sales increased 8.9%, following a 22.9% increase in the first quarter. All five of Target’s core merchandise categories had positive comparable gains. The company exclusive, or own, branded products grew in the mid-teens.

Digital comparable sales were up 10%, led by same-day services such as order pickup, drive up and Shipt, which up 55% in the quarter.

More than 95% of Target’s second-quarter sales were fulfilled by its stores, and more than half of Target customers used one of the company’s same-day services to fulfill their digital order.

“In the second quarter, our business generated continued growth on top of record increases a year ago, reinforcing Target’s leadership position in retail,” chairman and CEO Brian Cornell stated, “We’ve spent years building and investing in the durable model we have today, which is supported by a differentiated strategy and the best team in retail. Even after unprecedented growth over the last two years, we see much more opportunity ahead of us, and we’re leaning into opportunities to invest in the long-term growth and resiliency of our business.”

Similar to Walmart and Home Depot, which released their second-quarter results on August 17, Target’s second-quarter sales growth was more modest than its first quarter.  Also, U.S. retail sales slipped in July, with analysts pointing to a number of possible factors, from concern about the COVID-19 delta variant to consumers spending more on entertainment and other services. But on a call with reporters, Target chairman and CEO Brian Cornell said store traffic and spending patterns have not changed at Target.

"We continue to see a very optimistic consumer that's certainly shopping with caution wearing masks more and more across the country but we are seeing tremendous resilience in the consumer today and our traffic patterns I think represent that," Cornell said on the call.

Target said it opened two new “flow” centers during the quarter and has more than 100 store remodels underway. The centers send small shipments to stores more frequently.  Also during the quarter, the chain its sixth bonus for Target’s frontline employees in 18 months.

The company raised its forecast for the year. For the second half of 2021, Target now expects high single digit growth in comparable sales, near the high end of the previous guidance range. Target also expects its full year operating income margin rate will be 8% or higher.

In addition, Target’s board authorized a new, $15 billion share repurchase program. Repurchases under this program will begin upon completion of the 2019 program.

"Our continued strong operating performance and ability to generate cash have supported meaningful investments in our team and our business, along with the return of capital through both dividends and share repurchases. said CFO Fiddelke in a release. “This new authorization reflects our confidence in the sustained, strong performance of our business, which will enable continued share repurchases in keeping with our long-standing capital deployment goals."