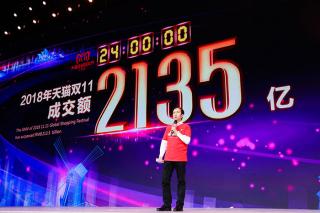 Amazon’s Prime Day has nothing on Alibaba’s annual shopping event.

With more than 180,000 brands participating in this year’s event, and customers in 230 countries and regions completing transactions, this was the company’s most-inclusive and farthest-reaching event to date, according to Alibaba.

The top countries selling to China included Japan, the United States, South Korea, Australia and Germany. This year’s event also marked the debut of Alibaba’s recently acquired unit Lazada. The Southeast Asian e-commerce company held its own single-day shopping festival in its six Southeast Asian markets, according to the company.

Interest and participation among U.S.-based brands comes on the heels of an increasing trade war between China and the United States. The latest round of tariffs went into effect on Sept. 24, which imposed a rate of 10%. This will increase on Jan. 1, 2019 to 25%. China announced retaliatory tariffs and, thus, it is likely that the U.S. will propose a fourth list of tariffs.

“Today we witnessed the strength and rise of China’s consumption economy and consumers’ continued pursuit to upgrade their everyday lifestyles,” said Daniel Zhang, CEO of Alibaba Group. “Participation from the entire Alibaba ecosystem enabled our brand and merchant partners to engage with consumers like never before.”

As big as the event has gotten in the last decade, only 17.5% of China’s commerce is done online, according to the National Bureau of Statistics of China. Alibaba plans to use its network, including its New Retail strategy that merges online and offline experiences, to increase the pace and breadth of the event moving ahead.

“We will, for sure, continue to evolve and continue to be innovative,” said Zhang. “I think, going forward, people’s lifestyles will change with the development of new technologies and business models … Looking ahead, Alibaba will continue to lead the evolution towards the future digital economy and lifestyle.”
Advertisement