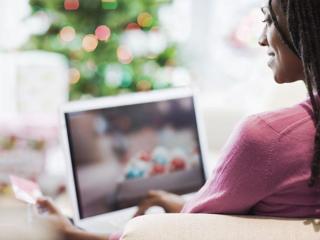 For the first time ever, online orders are estimated to outshine in-store spending this holiday season.

That's according to “Deloitte’s 32nd Annual Holiday Survey. The study found that customers intend to spend 51% of their holiday budget online, compared with 42% in-store.

In last year's survey, online and in-store comprised an equal share, at 47% each. Prior to 2016, people planned to spend more in-store, the study said.

Shoppers’ total holiday spending is expected to average $1,226 — including gifts and gift cards, along with non-gift categories (non-gift clothing, home/holiday furnishings, entertaining at home, socializing away from home and other holiday-related spending). That number nearly doubles among households earning $100,000 or more, averaging $2,226. Higher-income households are even more inclined to buy online. Specifically, those earning $100,000 expect 57% of their spending will be online, and 39% in-store.

Online destinations are also widening the gap among places consumers plan to shop for gifts. This year, 55% of respondents plan to shop online for gifts, increasing its lead over mass merchants at 44%. Department stores are a distant third at 28%, down 3 percentage points from last year.

When shopping on a smartphone, more people are inclined to use dedicated retailer apps or payment apps when making purchases. Roughly 1 in 5 (22%) of respondents using smartphones for holiday shopping think they'll pay for purchases in-store with a mobile wallet app. However, nearly twice that number (40%), anticipate using a retailer's app on their smartphone; and 36% plan to use a mobile payment app during the holiday season.

"Whether a retailer is online or store-based, their digital influence is one of the strongest cards to play this holiday season,” said Rod Sides, vice chairman, Deloitte LLP and U.S. retail, wholesale and distribution leader.

“Even though 80% of people said they expect the majority of their shopping will fall in late November onward, decisions about where they'll shop and what they buy will be largely determined by the digital interactions occurring now,” he said. “In the survey, we found that retailers have a 75% probability of converting a desktop or laptop shopper to a purchaser along with a 59% probability of converting a smartphone shopper."

When it comes to the type of gifts customers are eyeing, gift cards and clothing tie for the top gift people intend to purchase. In fact, nearly half of respondents (49%) plan to buy these items for others this holiday season. Electronics (42%), gift cards (39%) and cash (36%) are also topping what customers hope to find in their own holiday stockings this year.

There has also been a healthy uptick in higher-end category purchases over the past five years — and the momentum continues. Those who plan to buy jewelry as a gift rose from 18% in 2012 to 26% in 2017. The cosmetics/fragrances/health and beauty category grew from 18% to 29%.
Advertisement