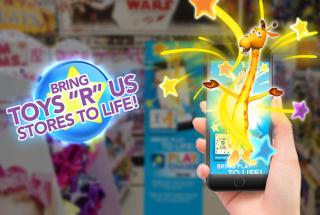 Toys “R” Us wants to turn its stores into digital playgrounds.

Building off of its new brand position, “Today We Play,” the retailer is rolling out its augmented reality (AR) app, called Play Chaser, chainwide. The free-to-play AR app was introduced in a 23-store test earlier this month.

Through its partnership with PlayFusion, Toys “R” Us’ app delivers different AR games and play experiences on the screen of a customer's smartphone or tablet. Users activate the app by scanning dedicated access points throughout the store.

The first scan point, a front-of-store sign, features a virtual Geoffrey who pops out of a toy box and welcomes kids to the store, then sends them off on their virtual quest for play. Players unlock more experiences by scanning designated Play Chaser signage featured throughout Toys “R” Us stores.

During the test, the retailer reported that “thousands of kids” used the app to race monster trucks, peek into a world of safari animals, play virtual basketball, and digitally engage with other experiences at their local stores.

As the experience expands to stores nationwide, the app now features more than 10 interactive play experiences, including fishing in a virtual pond, popping virtual balloons floating around the store or caring for a digital baby doll, according to the company.

"We know consumers want more than just a place to shop — they want experiences — and at Toys “R" Us, they want to play," said Richard Barry, global chief merchandising officer, Toys “R" Us and Babies “R” Us. "With Play Chaser, we're transforming shopping into something beyond just the products we sell, bringing our stores to life with interactive, unique content that will resonate with customers and importantly the players – kids.”
Advertisement