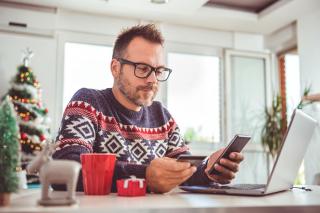 Total online sales hit $80.3 billion from Nov. 1 through Dec. 6, up 18.6% from the year-ago period, according to new data from Adobe Analytics. It was the biggest online shopping period of all time in the U.S., beating last year’s record of $67.7 billion. The top states by basket size were Alaska, California, Washington, New York and Wyoming.

Adobe forecasts that the holiday season (Nov. 1 to Dec. 31) will see at least $124.1 billion in total U.S. online retail sales.

Mobile transactions increased 54.8% to $23.7 billion, with nearly three in five visits to retail sites coming from mobile devices. Social media platforms continued to have minimal impact on sales, at a 1.5% share.

The number of shoppers who bought online and picked up in store was up 46% from last year, Adobe found. And one fifth of U.S. shoppers plan to do more than three quarters of their online holiday shopping at big online retailers like Amazon.

As previously reported, Cyber Monday was the single largest online shopping day of all time in the United States, reaching $7.9 billion, up 19.3% from last year, according to Adobe.
Advertisement