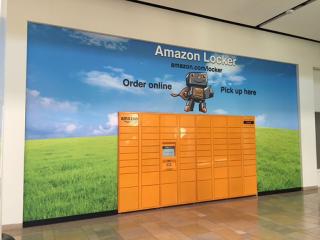 The e-tail giant reportedly wants to double the number of Amazon Hub Lockers installed across the U.S.

According to CNET, Amazon wants to evaluate more than 1,000 new possible locker locations every month, with the goal of using many of them. Currently, Amazon operates fewer than 10,000 Amazon Hub Lockers. The units, which function as automated self-storage units for pickup of online orders, can be found in locations including Whole Foods Market, 7-Eleven, Stein Mart, Blink Fitness, Chase Bank, Sprint stores. The lockers are also placed in locations such as college campuses and apartment buildings.

Amazon is said to be planning significant growth of the locker program as it moves toward standard one-day Prime shipping and has ceased its U.S. air and ground delivery agreements with FedEx.