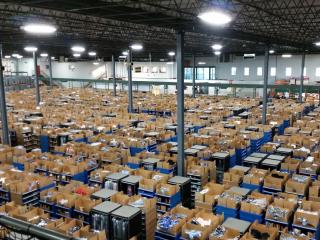 More than half (54%) of shoppers in the United States said they have abandoned an online purchase because delivery was too expensive. Worse, nearly a quarter (24%) of shoppers cancelled an order because of slow delivery speeds, according to a study from Arvato SCM Solutions.

When 26% of shoppers found their merchandise out of stock, they received no indication of when the merchandise would be available — a factor that prompted them to either abandon their purchase or shop with another retailer.

According to data, 56% of U.S. shoppers already use the 'buy online pick-up in-store' (BOPIS) option. While only 11% currently use two-hour BOPIS options offered by retailers, 32% said they would like to see more retailers offering one or two hour collection spots for BOPIS purchases going forward.

"Delivery isn't just about fulfillment, but an integral part of the decision-making process for the online shopper,” said Ferka Vukel, Director Fashion and Cosmetics at Arvato SCM Solution.

“Those retailers who are not offering a fast, convenient and, crucially, free delivery service are at risk of losing out,” Vukel said. “With retailers having to balance the rising cost of fulfillment against the cost of losing an order, there is no easy answer. However, one thing all retailers can do is to be transparent, giving customers an estimated delivery cost from the outset to avoid frustration at the end of the shopping journey.”

Looking ahead, delivery will become even more significant to buyer behavior in the future. Within five years, shoppers expect retailers to offer increasingly innovative delivery solutions, including driverless vehicles or Uber drivers doubling up as carriers to get their products to them (7%), and orders from multiple retailers to be delivered in one go (17%).

Amazon's Prime Air has also captured shoppers’ imagination with 13% wanting to see adoption of drone deliveries from retailers, while 11% want 'drive thru' collection lockers. Another 8% think retailers should offer 'to device' delivery — where an item is delivered to a customer by using their smartphone or tablet to geo-locate them.

"At the moment innovations such as drone delivery are more about capturing consumers imagination than reality, but what we are seeing from consumers is that speed, cost and convenience are imperative when choosing to shop online and that is something that is not going to change any time soon," concluded Vukel.
Advertisement