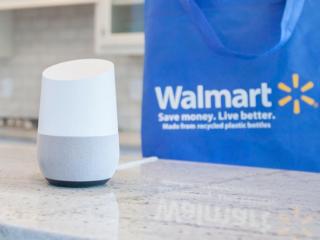 Walmart is determined not to cede any ground to Amazon.

In a partnership that takes direct aim at the online giant and its Alexa voice-controlled device, Walmart is teaming up with Google to offer hundreds of thousands of items available for voice shopping via Google Assistant, the search giant's online shopping platform that lives on its smart speaker Google Home and other smart devices. It will be the largest number of items currently offered by a retailer through the platform, according to Walmart.

The service is another bulwark in the defenses Walmart is building up against its biggest rival. It will be available in late September.

The deal with Walmart is Google's largest retail partnership to date. While other retailers, including Target, Kohl's and Ulta, sell on Google Express, no other company currently offers the depth of products Walmart will be offering. In related news, Google Express said it will now offer free delivery across its retailers as long as the order is above each store’s minimum threshold.

"When it comes to voice shopping, we want to make it as easy as possible for our customers," said Marc Lore, president and CEO, Walmart U.S. eCommerce. "That’s why it makes sense for us to team up with Google. They’ve made significant investments in natural language processing and artificial intelligence to deliver a powerful voice shopping experience. We know this means being compared side-by-side with other retailers, and we think that’s the way it should be. An open and transparent shopping universe is good for customers."

In another key distinction from the other retailers that sell via Google Express, Walmart will allow shoppers to link up a pre-existing user account with Google Express on the back-end. The discounter will integrating its Easy Reorder feature, which has data on customers' store and online purchases, into Google Express. Shoppers who want to reorder their favorites can link their Walmart account to Google Express.

"This will enable us to deliver highly personalized shopping recommendations based on customers’ previous purchases, including those made in Walmart stores and on Walmart.com," Lore said.

Lore said that Walmart will roll out increased voice shopping capabilities in 2018.

"Next year, we will also leverage our 4,700 U.S. stores and our fulfillment network to create customer experiences that don’t currently exist within voice shopping anywhere else, including choosing to pick up an order in store (often for a discount) or using voice shopping to purchase fresh groceries across the country," he said.