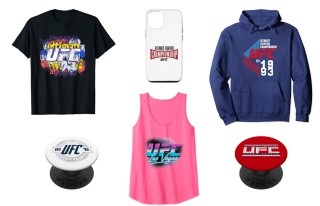 UFC and Amazon are partnering to provide on-demand merchandise.

A leading global mixed martial arts organization is collaborating with the Amazon Merch on Demand service.

Consumers are able to choose from among hundreds of new and original designs that have previously not been available.

The new catalogue of items is made available through UFC’s participation in Amazon Merch on Demand, a print-on-demand service that allows consumers to shop for fan merchandise. The expanded selection of UFC merchandise is now available in Amazon stores in the ‘UFC Powered by Zappos’ brand page.

“We’re thrilled to work with an incredible company like Amazon to enhance our fan gear with a broad array of new products with original designs for UFC fans,” said Tracey Bleczinski, senior VP, UFC Global Consumer Products. “UFC fans are deeply passionate and loyal, and our fan gear is an authentic way for them to show their love and pride for the sport and stay connected to the brand.”

UFC’s collaboration with Amazon evolved from the organization’s partnership with Amazon-owned Zappos.com, which in 2021 became the exclusive wholesale manufacturer and distributor of officially licensed UFC apparel and accessories sold at retail in the U.S.

The online footwear and accessories retailer, an independent subsidiary of Amazon, is currently in a multi-year partnership with UFC. Both companies are headquartered in Las Vegas.

Under the terms of the UFC-Zappos agreement, Zappos.com manufactures and distributes officially-licensed UFC merchandise for men, women and youth, including clothing, footwear, headwear, and other accessories. Specific products include items such as t-shirts, hoodies, pants, shorts, sandals, warmup jackets, leggings, and running and training footwear. Zappos.com has the rights on an exclusive basis in the U.S. and non-exclusively outside the U.S.

"It's a very natural relationship – we're both Las Vegas-based organizations that share a passion for inclusivity which extends into the fitness world,” Kedar Deshpande, CEO, Zappos.com, said at the time the partnership was launched. “UFC celebrates all its athletes equally, and we couldn't be more humbled to welcome them into the Zappos family."

"Our merchandise and apparel are primary touch points that help connect our fans with UFC's brand," said Bleczinsk of UFC.  "Zappos is a company of innovators, their customer service is without equal, and their reach is global. We couldn't ask for a better brand to help us serve the more than 300 million UFC fans worldwide."