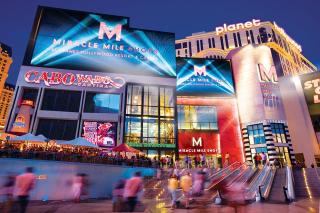 Miracle Mile Shops, which has served as a backdrop for several movies and TV shows, is 1.2 miles long.

Las Vegas’s Miracle Mile Mall opened 22 years ago this week, but not with that name.

The 475,000-sq.-ft shopping experience that opened at the Aladdin Hotel on August 17, 2000, as the Desert Passage mall was remade with a Los Angeles theme and rechristened in 2007.

Here are 21 other fun facts about the unusual property:

1. It is 1.2 miles to walk the entire Miracle Mile Shops.

2. The name “Miracle Mile Shops” is not only a reference to its walking distance, but also to the famous neighborhood of that name in Los Angeles—a thematic link to its current connecting resort, Planet Hollywood.

3. The property was originally constructed as the Tallyho Hotel in 1962.

7. Miracle Mile Shops is home to Tipsy Robot, which at the time of its launch was the first land-based robotic bar in the nation.

8. Its Club Tattoo, which was co-owned by the late lead singer of Linkin Park, Chester Bennington, debuted there. Among its customers: Jonah Hill, Steve Aoki, Slash, Guy Fieri, Chrissy Metz, and Bennington himself.

9. The center’s other Vegas firsts include Quay Australia, Morphe, and Garrett Popcorn Shops.

13. The Sin City Sindy statue in front of the Showgirl Bar and V Theater is the tallest showgirl on the Strip. She’s 31 feet tall.

16. In 2018, it introduced Jules, a fun and trendy interactive chatbot used to assist guests.

18. The sky ceiling by V Theater is 85 feet high. The surrounding mountains are 75 feet high.

20. Miracle Mile Shops is now undergoing interior and exterior renovations that will feature state-of-the-art LED digital screens and signage along with modernized landscaping.

21. Miracle Mile Shops continues to pay homage to its Desert Passage roots. The shops still feature a piece of the original ornate flooring and the 155-ft.-long Desert Passage ship.