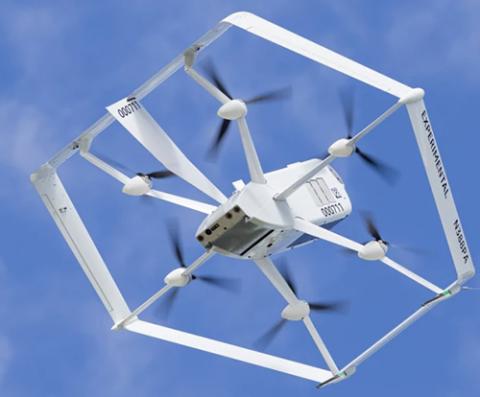 Amazon drone delivery is taking off in at least two locations in 2022.

The e-tail giant will offer customers in College Station, Texas – home of Texas A&M University – the opportunity to receive Prime Air drone deliveries in the U.S. Drone deliveries will be fulfilled in less than one hour from the time a digital order is placed. In addition, starting in fall 2022, three stores at the Texas A&M football stadium, Kyle Field, will be equipped with licensed Amazon “Just Walk Out” frictionless shopping technology.

Amazon will fulfill drone deliveries in less than one hour from the time an order is placed. For these deliveries, the drone will fly to the designated delivery location, descend to the customer’s backyard, and hover at a safe height. It will then safely release the package and rise back up to altitude.

The company says it has created more than two dozen Prime Air delivery drone prototypes, including a model publicly unveiled at its 2019 re:MARS conference (Machine Learning, Automation, Robotics and Space) in Las Vegas. The company’s first test drone delivery in the U.S. took place at its March 2017 re:MARS conference, preceded by its first U.K. delivery by drone in December near Cambridge, England in December 2016.

According to Amazon, it has developed a “sense-and-avoid” system that will enable operations without visual observers and allow its drone to operate at greater distances while safely and reliably avoiding other aircraft, people, pets, and obstacles. The company also says the electric drones are part of its Shipment Zero program intended to make all Amazon shipments net zero carbon by 2030.

The sense-and-avoid system is designed for two main scenarios: to be safe when in transit, and to be safe when approaching the ground. Using proprietary algorithms, Amazon says its new drones can identify a static object in its path, like a chimney, as well as detect moving objects on the horizon, like other aircraft.

If obstacles are identified, the drone is designed to automatically change course to safely avoid them. As the drone descends to deliver the package into a customer’s backyard, it ensures that there’s a small area around the delivery location that’s clear of any people, animals, or other obstacles.

“We are impressed with so many aspects of College Station,” Amazon said in a corporate blog post. “The innovative research conducted by Texas A&M University, the small-town feel, and the sense of community that is clear from the minute you arrive in town all make it a very special place. We are thrilled about the opportunity to launch this service in College Station and partner with the city and its world-class university on some of the great work they’ve been doing in the area drone technology.”

“Being one of the first drone delivery locations for Amazon puts College Station at the forefront of this exciting technology. What happens here will help advance drone delivery for the rest of the country and perhaps the rest of the world,” said John Sharp, chancellor of The Texas A&M University System. “We welcome Amazon to our community and stand ready to assist however we can.”