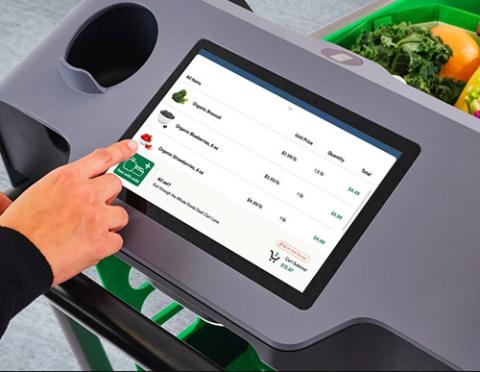 The Amazon Dash Cart has a number of new features.

Two years after its debut, the Amazon Dash Cart is getting a reboot.

Amazon is introducing a new version of its Dash Cart smart shopping cart device. First announced in July 2020 and officially launched in September 2020, the Dash Cart operates on a technology infrastructure similar to that supporting the Amazon Go cashierless store format, using a combination of computer vision algorithms and sensor fusion to identify items customers put in the cart and allow them to shop, pay for their items and leave without having to wait in a checkout line.

Amazon says it built the updated version of the Dash Cart based on customer feedback. Features of the new iteration include:

How it Works
To use the new version of the Dash Cart, shoppers log in through a QR code in the Amazon or Whole Foods Market app, which allows them to sign in and begin using the cart. From there, shoppers place their bags (if using them) in the cart and start shopping, scanning their items using one of the cameras near the handlebar of the Dash Cart.

The cart uses a combination of computer vision algorithms and sensor fusion to help verify each item placed in—and removed from—the cart. The Dash Cart’s screen shows a real-time receipt of all items in the cart, and when shoppers are ready to check out, they exit the store through the Amazon Dash Cart lane and their payment is processed using the credit card associated with their Amazon account. Shoppers will receive an emailed receipt shortly after leaving the store.

“Our goal with the Dash Cart has always been to make in-store shopping more convenient by eliminating the need to stand in checkout lines or unload and reload items at self-checkout stations, and we hope shoppers enjoy these updates as much as we think they will,” said Dilip Kumar, VP, physical retail and technology, Amazon, in a corporate blog post.

"As many of our customers return to their in-store grocery shopping routines, it's exciting to introduce new and unique ways for them to shop our stores," said Leandro Balbinot, CTO for Whole Foods Market. "We're thrilled that the newest version of Dash Cart will debut in our Westford store and can't wait to hear the feedback from our customers there."