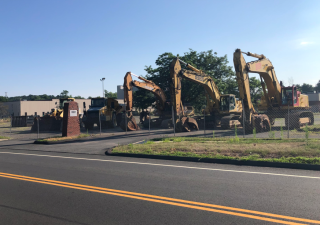 The Shoppes of Kelson Row will rise on the long-abandoned site of what once was the HQ of America's fourth largest discount chain. (PHOTO: Thomas Sepio)

More than 15 years after Ames Department Stores and its well-known CEO Joe Ettore closed shop and exited their Connecticut headquarters, the building will finally be torn down.

The site on the Silas Deane highway, less than 10 miles from Hartford, has been purchased by Hamden, Conn.-based Belfonti Companies, which plans to build a 213-apartment complex on it. Twenty-thousand sq. ft. of ground space will be devoted to retail and office at what will be called Kelson Row.  The retail portion will be called The Shoppes at Kelson Row.

"The choice of name comes from the town of Rocky Hill's historical significance as a ship-building community," said Ray Carpentino, the economic development director for the town of Rocky Hill.  "The word 'kelson' is a derivative of 'keelson', which is the reinforcing structural member or backbone on top of the keel in the hull of a wooden vessel.”

In the Seventies and Eighties, Ames grew its profile to more than 600 stores with the acquisitions of the Big N, Kings, and Zayres department store chains. But it filed for Chapter 11 bankruptcy protection in 1990 after extending consumer credit to customers without checking their credit ratings.

Ames made a comeback in the Nineties and, with the acquisition of Hills Department Stores, became nation's fourth-largest discount retail chain behind Walmart, Kmart, and Target. Ames’s enhanced stature did not last very long, however.  If filed for Chapter 11 again in 2002 and closed all of its remaining 327 stores.