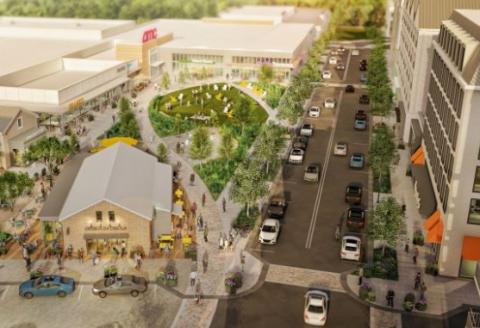 A Chick-fil-A franchisee's dream to be near this mixed-use center that Edens plans to build on the site of North DeKalb Mall has ended.

Ever since the speed in fast-food has been driven higher by services such as DoorDash and Uber Eats, municipalities nationwide have lightened up on their strict assessments of drive-thru lanes. But not in DeKalb, Ga., apparently.

The owner of a drive-thru-only Chick-fil-A near the North Dekalb Mall sought to acquire a bigger location even closer to the property that would allow it to add a large dine-in section. But residents near the mall were opposed. When his application came before DeKalb County’s Board of Commissioners last week, residents living near his proposed new site raised a huge outcry and he withdrew it.

“It will disadvantage a minority business owner who has given his heart and soul to the neighborhood for many years. But we understand the opposition has had success,” said Chick-fil-A applicant David Kirk in a report in The Atlanta Journal-Constitution.

Traditional enclosed malls in the Atlanta area have gone through a rough few years, their business drawn away by modern amenity-driven town centers like Atlantic Station and Avalon in Alpharetta. At the same meeting where the Chick-fil-A was protested, the Dekalb County Board unanimously rezoned the North Dekalb Mall site for redevelopment as a mixed-use property.