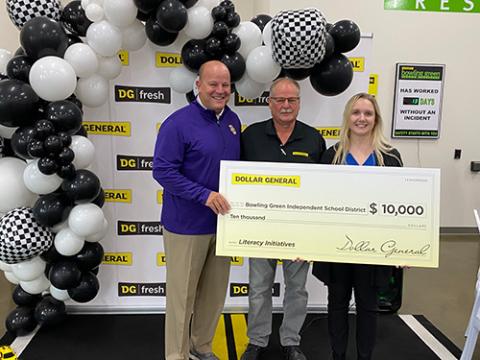 The discount retailer has been operating the $25 million, approximately 160,000-sq.-ft. since summer 2021. At full capacity, the facility is expected to employ more than 130 workers within the company’s distribution and DG Private Fleet networks, as well as support more than 1,500 Dollar General stores.

Located in the Kentucky Transpark, Bowling Green’s DG Fresh facility is Dollar General’s third distribution center in Kentucky, but the first fresh facility for the commonwealth.  The site was selected for its convenient access to Interstate 65, proximity to Dollar General stores, Bowling Green and Warren County’s business environment and workforce, local and state economic incentives, and other considerations.

Dollar General is on track to open 1,050 stores in fiscal 2021. It also will undertake 1,750 store remodels and 100 store relocations, and completed the initial rollout of its DG Fresh concept. One of Dollar General’s top initiatives in recent years has been the addition of freezer and cooler space in new and remodeled stores to allow stores to offer more refrigerated and frozen products.

More recently, the retailer has been adding fresh produce. Dollar General has said its stores offering produce feature the top 20 items typically sold in grocery stores and approximately 80% of the produce categories carried by most grocers. The discounter, which currently offers fresh produce in more than 1,300 stores, plans to expand the offering in up to 10,000 locations, including a “meaningful” number of stores located in United States Department of Agriculture defined food deserts.

The expansion comes as Dollar General has entered into an operational partnership with Feeding America to provide access to food resources in rural and underserved communities and to proactively address food insecurity across the country. Approximately 75% of Dollar General stores serve communities of 20,000 or fewer individuals.

As part of the official celebration of its new Bowling Green facility, Dollar General made a surprise $10,000 donation to the Bowling Green Independent School District.

“We are pleased to support Bowling Green’s educators and students as we celebrate our newest distribution center opening,” said Denine Torr, Dollar General VP of social responsibility and philanthropy. “Our roots run deep in south central Kentucky, and we are proud to invest in education in our hometown communities. We hope this donation will help the district continue to enhance and expand their literacy efforts and have a long-lasting impact.”