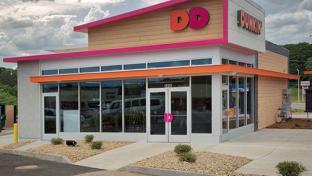 The company is targeting airports, universities and travel plazas for growth. Dunkin’s recent non-traditional openings include various sites across Las Vegas, including at the Convention Center, LINQ Hotel and Arizona Charlie’s Boulder Casino, as well as a reopening at the new Virgin Hotel.

Looking ahead towards the remainder of the year, Dunkin’ plans to continue opening non-traditional locations by focusing on airport expansion within New York’s JFK Airport (in Terminal 1) and Chicago’s O’Hare Airport ( in Terminal 5).

“Dunkin’ continues to modernize with convenience at the forefront,” said Chris Burr, director of non-traditional development at Inspire Brands, which acquired Dunkin’ in November 2020 in a blockbuster deal. “Our flexible concepts for any non-traditional format have been an essential aspect of our growth over the past decade and will remain a vital part of our future development strategy. As a new member of the Inspire family of brands, Dunkin’s strong experience in non-traditional development complements Inspire’s vision for non-traditional growth across the portfolio, bringing valuable expertise to our best-in-class shared development team.”

In 2020, Dunkin’s non-traditional development included 27 new locations, including openings throughout airports in Boston, San Antonio, St. Petersburg-Clearwater, and New York City. In addition, the brand opened at the Mall of America, American Dream Mall, as well as Air Force Bases in New Mexico and Utah, and on campuses at the University of Maryland and University of Massachusetts at Dartmouth.

Dunkin’ said its non-traditional pipeline was supported by the brand’s rapid response to the pandemic with operational modifications to sanitation and social distancing procedures, while continuing to serve guests on-the-go with a relatively contactless, entirely disposable, and modernized experience.