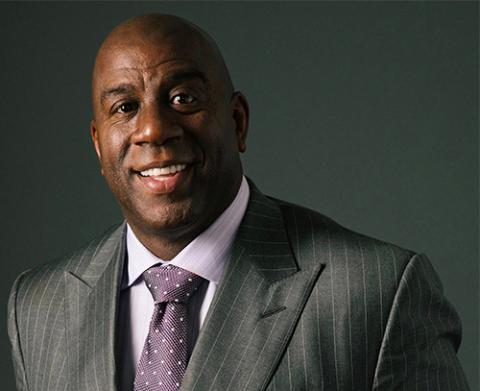 Chain Store Age’s SPECS Show is proud to announce that five-time NBA champion, Hall of Famer and influential investor Earvin “Magic” Johnson will keynote the 58th annual SPECS event, which will be held March 20-22 at the Gaylord Texan, Grapevine, Texas.

Parlaying skills and tenacity perfected on the basketball court into the boardroom, Johnson's business acumen has helped him build Magic Johnson Enterprises (MJE).

For the last two decades, Johnson has consistently turned heads with his unprecedented partnerships. In his early years as an entrepreneur, he forged an alliance with Sony Pictures to develop Magic Johnson Theatres. In 1998, he teamed with Starbucks to become the only franchisee in the history of the company, acquiring and eventually selling 125 stores in a lucrative move. Still a commanding presence in popular culture, Johnson made history in 2012 when he became co-owner of MLB’s Los Angeles Dodgers.

Johnson continues to expand his influence through his many businesses that include: EquiTrust, a $20 billion financial services company, and SodexoMAGIC, a food service and facilities management company. Through a newly formed fund, Johnson is investing millions of dollars on infrastructure improvement in the United States and is also one of the leading investors in a number of minority-owned technology companies.

On Monday, March 21, this influential investor will discuss his journey in sports, as well as his role as chairman and CEO of Magic Johnson Enterprises.

The SPECS Show is the retailindustry’s premier conference for store planning and facilities professionals, providing a forum where top retailers and suppliers involved in the planning, design, construction and maintenance of stores, restaurants and non-traditional retail come together to network and collaborate.