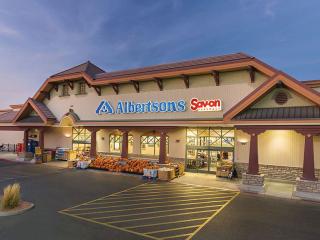 Ahead of its planned acquisition of Rite Aid, Albertsons' solid e-commerce and private label helped narrow its loss for the quarter.

Albertsons’ identical sales increased 0.2%, with a sales and other revenue increase of $18.7 billion, or roughly 1%, which it said was largely driven by a $154 million boost in fuel sales. It’s profit margin also increased 0.3% over the year-ago period, hitting 27.7%. It attributed this bump to lower advertising expenses, better product mix and lower shrink expenses, which improved sequentially by 45 basis points from Q4 2017. Adjusted EBITDA was $815.8 million — a 5.7% increase.

The company also has been building out its portfolio of private-label brands. During the quarter, Albertsons added more than 400 new items and improved own-brand sales penetration by 56 basis points to sit at 24%. Additionally, e-commerce sales, which include sales of meal kits from the recently acquired Plated, increased 108%. Albertsons also converted 243 stores in Q1 in an effort to stay on track with Safeway integration, and expects all store conversions to be complete by September.

“We are pleased with our first quarter results as both identical sales and Adjusted EBITDA increased for the second consecutive quarter,” said Bob Miller, Albertsons chairman and CEO. “We continue to roll out unique options for our customers as we strive to differentiate through our best in class Own Brands and rapidly expanding e-commerce offerings. We are also reaffirming our fiscal 2018 guidance today and remain on track to deliver annual Adjusted EBITDA of $2.7 billion and complete the store conversions related to the Safeway integration by September, which we expect to allow us to further grow and enhance our operating performance.”

As it plans for the Rite Aid deal to close in the second half of 2018 (the Camp Hill, Pa.-based retailer is busy outlining the merits of the deal to its shareholders, who must approve the deal, ahead of an Aug. 9 special meeting), Albertsons has been working on increasing its liquidity, with net cash from operating activities up nearly $400 million over the year-ago period to $911.6 million. As of June 16, Albertsons had no borrowings outstanding under its $ billion asset-based loan facility and a total availability of roughly $3.1 billion.

“We are also looking forward to our merger with Rite Aid,” said Jim Donald, President and COO. “Together we will be a differentiated leader in Food, Health and Wellness. We expect to realize $375 million in annual run-rate cost synergies within three years, and have the opportunity to generate $3.6 billion in annual sales synergies to fuel our future growth.”

Looking forward, Albertsons projected identical sales growth of between 1.5% and 2% for the year, complemented by adjusted EBITDA of roughly $2.7 billion and an effective tax rate of between 25% and 27%. It expects to spend $1.2 billion on capital expenditures.
Advertisement