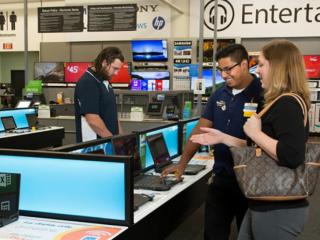 Today's numbers show that Walmart is firmly on the advance, both in its home market and elsewhere. A revenue rise of 4.2%, which equates to a $5 billion increase in sales over the period, is impressive and underscores the company's determination to not only defend its leading position but to extend it.

Walmart U.S. led the way with a 4.3% increase in revenues and a 2.7% increase in underlying comparables. Both figures represent an acceleration of growth since the prior quarter. Some of this is down to sales benefits following the hurricanes, and recent acquisitions have also inflated the numbers. Nevertheless, the core business is performing well, with a broad pickup in both customer traffic and spending across all of Walmart's channels.

In our view, there are two factors that underpin Walmart's current success.

The first of these is online, where Walmart has made extensive investments both in new divisions and in enhancing its existing proposition. In the U.S., Walmart's e-commerce sales were up by around 50% over the prior quarter, a stellar rate of increase which shows Walmart is growing its digital market share at pace. That most of the growth came from the core Walmart.com operation rather than from new additions, highlights the success of initiatives such as free two-day shipping and an expanded online selection, which now encompasses over 70 million products. From our data, it is clear that Walmart is not only getting existing customers to spend more online but is also attracting new shoppers.

With a solid e-commerce base, Walmart is now looking to deepen its offer and experience in a select number of categories. This is one of the reasons it has struck deals with partners like Lord & Taylor in fashion and is building relationships with premium brands like KitchenAid and Bose. Walmart's longer-term aim is clear: it wants to become the go-to online destination for both every day and specialty items. The push into higher-end products should also help to bolster online margins.

Although online has been a success story for Walmart, the second reason for its U.S. growth is the performance of stores. Traffic held up well across the U.S. estate, with price cuts helping to keep customers loyal, especially in categories like grocery. Some modest improvements to store layout and design have also aided conversion rates, particularly in non-food categories. For a retailer of its size and scale, we believe that Walmart's ability to keep its stores growing is impressive.

Away from the U.S., the contribution from international has also picked up. The Mexican operation is benefitting from investments in e-commerce, including an expanded online offer. Revenue in Canada has increased, mainly thanks to sharper pricing and expansion of the number of locations offering grocery pickup.

In the U.K., Asda posted its second consecutive quarter of comparable growth. While this result comes off the back of a long run of weak performance and does not yet constitute a return to sustainable growth, we believe the investments made in price, offer, and service are starting to pay dividends.

All in all, today's results show that Walmart is a retailer on the front foot. Admittedly, the investments it is making in price and e-commerce are taking their toll on the bottom line, but they are also positioning the company for significant future success.
Advertisement