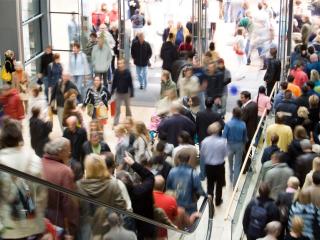 China’s economy may be slowing, but it is on track to overtake the United States and become the world’s top retail market this year.

The latest forecast by eMarketer predicts that retail sales in China will increase 7.5% to $5.636 trillion in 2019. That’s approximately $100 billion more than the United States, where retail sales are expected to grow 3.3% to $5.529 trillion.

"In recent years, consumers in China have experienced rising incomes, catapulting millions into the new middle class," said Monica Peart, senior forecasting director at eMarketer. "The result has been a marked rise in purchasing power and average spending per person."

A major driver of China’s retail economy is e-commerce. Online retail sales in China will increase 30.3% to $1.989 trillion in 2019, accounting for 35.3% of the country’s total retail sales, which is the highest percentage in the world, according to Marketer. The United States lags far behind, with e-commerce on track to represent 10.9% of total retail sales this year.

Emarketer noted that Alibaba will lead e-commerce sales in China with a 53.3% share. But its share has been steadily declining for the past several years as smaller players chip away at the e-commerce giant’s dominance. In particular, social commerce platform Pinduoduo has seen triple-digit growth since 2016, although its share remains small, according to eMarketer.