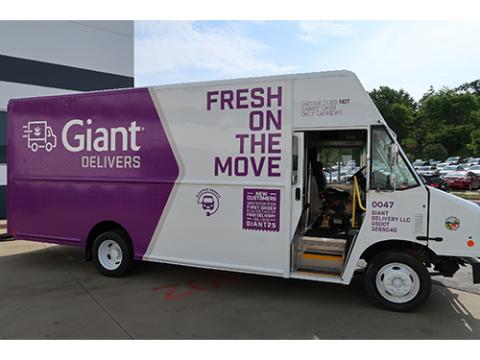 Giant Food has deployed its first fully-electric grocery delivery vehicles, and there are more to come.

Two electric step-van vehicles have joined the Maryland-based regional grocer’s fleet of 128 Giant Delivers vehicles, making daily deliveries to customers throughout Giant's markets of Washington, D.C., Maryland, Virginia and Delaware. The new vehicles can cover 105 miles on one charge out of Giant's warehouse in Hanover, Md., and will allow drivers to omit fuel stops during the course of daily deliveries

The deployment was made possible through a grant awarded to Giant by the Clean Fuels Incentive Program (CFIP), created and managed by the Maryland Energy Administration (MEA). The program is designed to create a cleaner and greener transportation sector within Maryland and improve the state's economy and environment in the process.

During the next several years Giant plans to transition more of its Giant Delivers fleet to all-electric. The deployment of the first two vehicles marking the next stage in Giant's commitment to making a positive environmental impact, the company said.

"Cleaner transportation is part of Giant's larger sustainability efforts and commitment to supporting the local environment," said Joe Urban, VP of distribution operations at Giant Food. "We are excited to bring these vehicles into our Giant Delivers fleet and kick off the transition to all-electric delivery."

The two vehicles were purchased from Motiv Power Systems, a Silicon Valley innovator of medium-duty all-electric trucks and buses engineered and made in America. The vehicles will produce zero emissions and quieter operations while still providing the same grocery storage capacity. Over the lifetime of the vehicles, they are expected to displace over 210,000 gallons of petroleum and reduce GHG emissions by 63%.

"We are thrilled to represent another EV milestone through our Clean Fuels Incentive Program for Maryland," said MEA director, Dr. Mary Beth Tung. "As we continue to cement our standing as a transportation electrification leader, we know that supporting the deployment of fleet electric vehicles reduces our reliance on foreign petroleum and emissions, while also lowering operating costs for businesses."

Giant is headquartered in Landover, Md., and operates 164 supermarkets in Virginia, Maryland, Delaware, and the District of Columbia.  Included within the 164 stores are 152 full-service pharmacies, 92 full-service PNC Banks and 26 Starbucks locations.