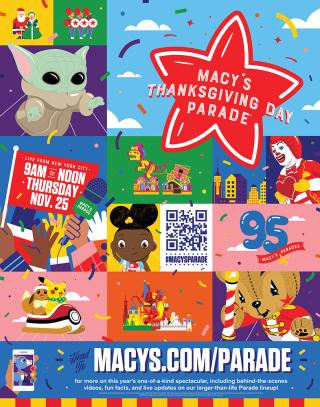 The 95th annual Macy’s Thanksgiving Day parade will commence at its traditional starting point, and include online previews.

After initially announcing the general public will once again be able to line the streets and sidewalks of New York City to watch the annual Macy’s Thanksgiving Day Parade in September 2021, Macy’s has now released specific details on the exact public viewing locations, including viewing maps, entry guidelines and restrictions. The parade was dramatically scaled back last year amid the pandemic into a television-only event.

The parade will feature 15 giant character balloons, 28 floats, 36 novelty and heritage inflatables, more than 800 clowns, 10 marching bands and nine performance groups, a host of musical stars, and a special appearance by Santa Claus.

To safely produce the annual Thanksgiving Day event, Macy’s said it partnered closely with the City and State of New York to create a production plan that would ensure health and safety practices aligned with CDC guidelines, as well as current local and state government protocols.

For live spectators, the event begins at 9 a.m. ET on Thursday, Nov. 25, kicking off from its traditional starting line at 77th Street and Central Park West. From there, the procession will march down its traditional 2.5-mile route, taking it from Central Park West to Columbus Circle, turning onto Central Park South and then marching down 6th Avenue/Avenue of the Americas. At 34th Street, the Parade will make its final turn west and end at 7th Avenue in front of Macy’s Herald Square.

Public viewing will be set up along designated portions of the route and managed by the NYPD. Macy’s advised spectators to avoid bringing large bags, umbrellas, backpacks and strollers. The public entering viewing streets may be subject to security search. Additional viewing information is available at macys.com/parade.

In addition, Macy’s signature giant character balloons will be prepared for their Thanksgiving Day flights on Wednesday, November 24, on the Upper West Side. The Macy’s Balloon Inflation Celebration will be open to public viewing from 12-6 p.m. ET., and will be limited to vaccinated viewers and conducted with capacity limits to ensure social distancing practices are implemented.

For access, viewers must provide proof of COVID-19 vaccination and a photo ID with a name that matches the proof of vaccination. A negative test will not be accepted in lieu of vaccinated status. Children under the age of 12 who are not eligible to receive vaccinations may be accompanied by a vaccinated adult. Attendees are encouraged to social distance and masks will be required at all times. Entry to balloon inflation can be accessed at 72nd Street and Columbus Avenue. Following the vaccine verification and security check, viewers will be able to move through the checkpoint to view the balloons on 77thand 81st streets.

In addition, TV viewers nationwide can watch the parade via special broadcasts on NBC and Telemundo, from 9 a.m. – 12 p.m. in all time zones. For the first time, viewers can also stream the broadcast on Peacock.

Also for the first time, TV and streaming viewers will experience several augmented reality effects throughout the show. The macys.com/parade site will provide regular updates leading up to the parade, including behind-the-scenes previews, special tours, interactive historical information, educational activities, and more. Consumers can also follow @macys on various social media networks and post about the event on social media using the #MacysParade hashtag.

“For more than nine decades, the Macy’s Thanksgiving Day Parade has served to bring joy to millions, who gather with friends and family to experience this one-of-a-kind holiday celebration along the streets of New York City and in homes nationwide,” said Will Coss, executive producer of Macy’s Thanksgiving Day parade. “For our 95th celebration, Macy’s has created a spectacle to remember featuring a dazzling array of high-flying balloons, animated floats and incredible performers. We can’t wait to help New York City and the nation kick off the holiday season with the return of this cherished tradition.”