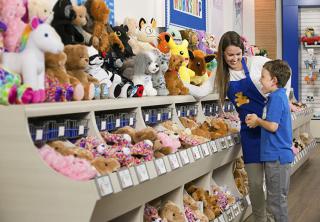 Sometimes, promotions are too popular—especially ones involving furry stuffed animals.

Build-A-Bear Workshop on Thursday ended its one-day “Pay Your Age” sale much earlier than expected after its stores were flooded with customers, with long lines, in some cases, extending outside malls. The promotion allowed customers who visited a Build-A-Bear store on July 12 to pay their current age to make a stuffed animal of their choice. (The sale was open to customers of all ages, with the price topping out at $29.)

"Per local authorities, we cannot accept additional Guests at our locations due to crowds and safety concerns," Build-A-Bear said in a statement posted to its website at 10:30 a.m. Thursday morning. "We have closed lines in our U.S. and Canada stores. We understand some Guests are disappointed and we will reach out directly as soon as possible."

The retailer called the response to the sale “overwhelming and unprecedented” in its 21-year history. It distributed vouchers to shoppers in lines, to be redeemed for a future purchase.

“But first, Build-A-Bear needs to get its alienated customers back on side,” he said. (For more analysis, click here.)

The popularity of the event was evident across the nation — and across the pond. At Syracuse's Destiny USA center in Syracuse, New York, the line stretched from the storefront around large portions of the mall, including the food court by the carousel. People started lining up at Mall of America at 6 a.m. The BBC reported that lines “about a mile long” formed at one U.K. location.

Build-A-Bear created the one-day promotion “to kick off its new everyday celebration of birthdays.”