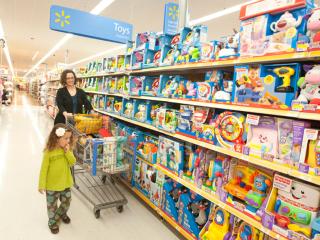 The retail giant just made another move in its battle against online rival, Amazon.

Walmart is testing a touch-screen monitor in its toy aisle at select stores in Texas. The solution connects shoppers to available inventory at store-level, and if it’s not on-hand, the device enables them to order it online, according to The Street.

Defined in the report as an "endless aisle-type concept,” the kiosk enables shoppers to choose from a list of toys it currently sells. If customers are unsure what to purchase, the device can suggest best-sellers by prompting users to answer a selection of questions, such as is it a gift, the gender of the child, and the child’s age.

If their choice is unavailable, shoppers can order it from the Walmart website and have it delivered to their home, Walmart CFO Brett Briggs said during a presentation at the Raymond James Investor Conference on Wednesday, March 8.

The endless aisle kiosk coincides with Walmart’s mission to become a more digital enterprise, as well as “making everyday easier for busy families,” Briggs explained, adding that the company has $15 billion in e-commerce sales, and more than 35,000 SKUs in its online assortment in the United States.


The solution is also the company’s latest competitive move against Amazon. Recently, the chain took on its rival by ending its ShippingPass program, a fee-based, two-day delivery service, in favor of a free two-day shipping program. Amazon’s Prime program charges $99 annually for unlimited two-day shipping.