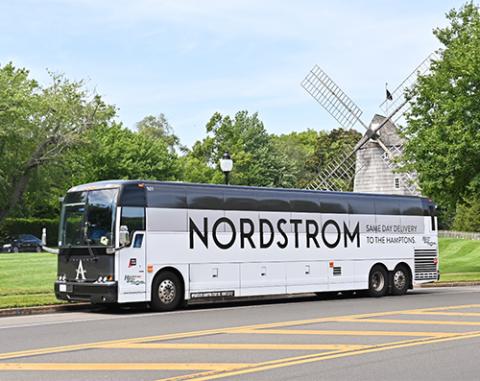 In 2020, Nordstrom began offering same- and next-day delivery services to the Hamptons.

Nordstrom is taking its service-focused, inventory-free store format to a popular summer destination in New York.

Nordstrom Local will open a pop-up in Southampton, N.Y., from May 27 through September 7. The temporary store will offer pickup of online orders made on Nordstrom and Nordstrom Rack’s websites, returns, alterations and complimentary gift-wrapping for all Nordstrom purchases.

In addition, the pop-up will accept used clothing and shoes for donations to Housing Works, where items will be sold to support local programs. It will also offer beauty packaging recycling.

Nordstrom Local debuted in October 2017, in Los Angeles. To date, the company has opened seven locations, with five in California and two in Manhattan.

“Nordstrom Local service hubs play an important role in delivering on our Closer to You strategy and our priority to win in our most important markets because they allow us to get physically closer to our customers," said Jamie Nordstrom, chief stores officer at Nordstrom. "This summer, we look forward to offering more convenience and connection to our Hampton's customers who will be able to access Nordstrom core services like next day order pick-up, returns and alterations in their summer neighborhood."

The New York metro area is one of Nordstrom's largest markets with 7 full-line stores, 15 Rack stores and two Locals. Since entering the New York market, retailer said it has heard from many of its customers that they are spending their summers in the Hamptons.

"New Yorkers have embraced Nordstrom Locals since we opened our first two locations on the Upper East Side and West Village in 2019," said Chris Wanlass, VP and general manager, New York City. "This summer at our Nordstrom Local pop-up in the Hamptons, we'll continue to make it easy for our customers and expand how and where we serve them.

In 2020 Nordstrom began offering same- and next-day delivery services to the Hamptons.