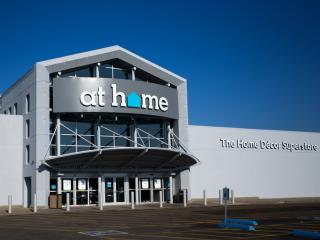 At Home reiterated its commitment to building out its store portfolio amid strong sales growth in its third quarter.

On the chain’s earnings call, chairman and CEO Lee Bird said that, with a longer term potential of at least 600 locations, “new stores are the growth engine for this business.” The retailer currently operates 178 stores.

“Our robust and improving new store productivity reflects our growing awareness and appeal as well as the great execution by our entire team,” Bird said.

Nearly all of the company’s new locations for the upcoming year (fiscal 2020 for At Home) have been approved, Bird added, with 10 stores already under construction. Next year’s pipeline includes the chain’s entry into the West Coast, with stores in California and Washington.

“We expect next year’s mix to be similar to fiscal 2019 with approximately 80% second generation sites and 20% new store builds,” he said. “The second generation real estate environment has plenty of attractive opportunities.”

“Alongside our topline performance, we delivered 280 basis points of gross margin expansion and reinvested in store labor hours and advertising, resulting in a 105% increase in operating income and a 61% increase in adjusted operating income,” said. Bird. “We also made progress on our key priorities aimed at strengthening both the customer experience and our superior value proposition.”
Advertisement