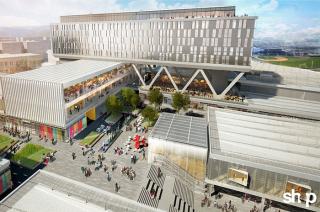 Empire Outlets, set to open this fall near the ferry terminal on Staten Island, has announced the signing of Levi Strauss & Co. as a tenant.

“Levi’s will now have the opportunity to sell its product to masses of tourists and residents as diverse and rich in culture and history as the Levi’s brand,” said Empire Outlets leasing chief James Prendamano, noting that the jeans brand’s outlet concept was new to the area.

The 5,450-sq.-ft. store will carry the company’s classic jeans and shorts, as well as accessories, outerwear, and tops.

Empire Outlets developer BFC Partners reports that the “vast majority” of the 100-plus shop spaces at the center are leased. Among those signed are H&M, Banana Republic, Brooks Brothers, Nordstrom Rack, Gap Factory and Columbia Sporting Good.

Slated to open the 40,000-sq.-ft. food and beverage deck are Shake Shack, Artichoke Basille’s Pizza, and the MRKTPL food hall.