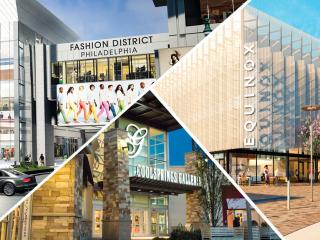 It’s the worst-kept secret in retail real estate. Consultants preach it and researchers chart it.  Customer experience is No. 1; shopping is No. 2. Eateries and entertainment brands are desired, department stores are repurposed.

A recent study from A.T. Kearney relabeled shopping centers and malls of the 21st century as customer engagement spaces. A survey of 81 leading malls by JLL found that adding new food and beverage options was top of the list of the biggest changes being made. And more than half of those properties were linking dining innovations to new entertainment concepts.

Chain Store Age spoke to three operators of those big regionals to find out how they are rethinking them and remaking them.

Below are three profiles of projects in various stages of development from Starwood, PREIT, and CBL.


Not a traditional mall, this outward-facing cityscape will be the region’s first metropolitan shopping destination that combines flagship brands and designer outlets with dining, entertainment and art experiences. This strategic leasing approach will help create a more curated retail experience for commuters, city residents and tourists — all in one convenient location.


In late 2018, CoolSprings Galleria will welcome a new prototype California Pizza Kitchen that features a bar that extends into the common area. CBL is also evaluating the best ways to extend the customer experience in the common area by offering live music with up-and-coming Nashville singers and songwriters and through partnerships with several community organizations to host regular events.

The Shops at Willow Bend


Perhaps the greatest change is The Shops’ focus around children and experience. Newly opened is the Plano Children’s Theatre, the flagship location for North Texas Performing Arts, offering classes, workshops and performances for youth ages 3 to 18. Also geared toward the entire family will be the Crayola Experience, one of just four in the United States, where the young and young at heart can indulge their inner artists. A luxury cinema will be announced shortly. Future plans include a 200,000-sq.-ft. Class A office building, completing the transition of this upscale mall into a mixed-use community that will serve guests and office workers from early morning until well into the evening.