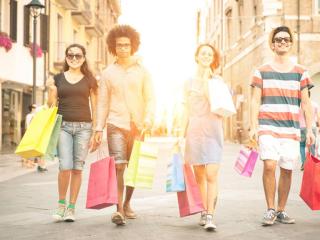 Not all Millennials think of the enclosed mall as a relic of their parents’ generation. In fact, 60 million of them don’t.

That’s how many of that coming-of-age generation visited malls in from last November through February, according to a consumer poll conducted by Opinion Research for the International Council of Shopping Centers. That’s more than a third of the total of 165 million Americans who did so in that time period.

• Two-thirds of those surveyed say physical stores will continue to capture the majority of their dollars, and eight out of 10 expect shopping malls to flourish for the next 10 years.

• Shoppers are very cognizant of the efforts being made by mall owners to upgrade their offerings and expect more pure-play online retailers to open at malls.

• Developers are on target with upgrades. The top three wants of consumers are unique eating and drinking establishments, locally inspired events, and entertainment complexes.

“The narrative around the death of the mall is a myth and consumers don’t believe they are going to lose their local center anytime soon," said ICSC president and CEO Tom McGee.