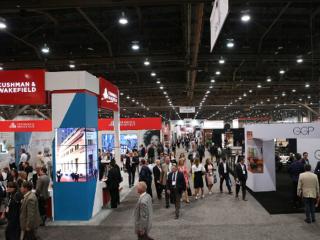 “The Mall is Dead, Long Live the Mall!” read the cover line on issues of Chain Store Age distributed at last week’s big retail real estate trade show in Las Vegas, and it was an apt description of retailer sentiment at RECon 2018.

Developers across the show floor shared varying assessments of traffic levels at the show, but gave high marks to traffic quality. Meetings were more positive than at last year’s show, they reported, with retailers eager to work with developers to expand their brick-and-mortar networks.

PREIT CEO Joe Coradino said RECon 2018 was the most productive show for the Philadelphia-based mall operator in five years. “I gauge the quality of the show by how many new-to-market retailers visit the booth. Last year we had 75 and this year we had 96,” said Coradino.

The aisles were rife with representatives of entertainment and food-and-beverage chains eager to expand their businesses at mixed-use centers and renovated malls. Coradino reported that some 40% of prospective new tenants visiting the PREIT booth fell into those categories compared to only about 15% five years ago.

Traditional retailers, too, were brainstorming new store concepts with developers adding residences and office space at their properties. The renowned Easton Town center in Columbus, Ohio, is adding residential square footage and is exploring new retail options with Shop Lab, a 600-sq.-ft. space that will rotate startups and clicks-to-bricks retailers.

“A lot of heritage retailers have mall concepts that are not as fresh as they’d like, and they’re looking to the developers for solutions,” said Anne Mastin, executive VP of leasing for Steiner + Associates, which owns and operates Easton.

Several other developers exhibiting at RECon had fresh attitudes on display about what consumer experience means and the lengths they need to go to deliver it. “We’re looking for new concepts,” said Whitney Livingston, senior VP of Madison Marquette, which is developing the 2.7 million-sq. ft. Wharf project in Washington, D.C. “You can’t rely just on big, established national brands. Today you’ve got to have something authentic to succeed.”

At the Poag Shopping Centers booth, CEO Joshua Poag, said that the lifestyle center was meant to keep evolving and that new retail concepts help Poag to do it. He should know. His father and company found Dan Poag conceived the concept of an outdoor center with lush landscaping and trademarked the term “lifestyle center” in the 1990s.

“We can evolve our concept with tenants and refreshing our mix is a contstant challenge,” Poag said. “We have several that are getting it done for us—West Elm being one that comes to mind as a really great store.”

Evolution, however, is a slow process, and so it will be with the remaking of America’s retail centers. “The problem is public markets,” said Poag. “Public [development] companies always hold the fear that some Wall Street analyst will destroy them if they dare to do something different.”