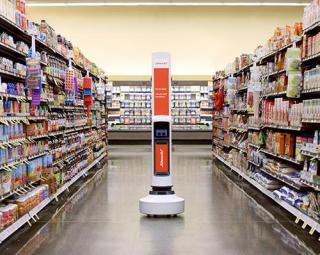 Shelf scanning is just one workflow retailers are automating with robots.

Robotic technology is popping up in every facet of retailing.

Robots are becoming a mainstream feature of retail operations. While they have long been used behind the scenes, more recently, robots are performing customer-facing activities, as well. Following are four current examples of robotic automation in retail.

Front end: In-store
Regional Midwest grocer Schnucks has committed to a multi-year, full-scale rollout of Simbe Robotics’ autonomous shelf-scanning “Tally” robots in all 111 Schnucks locations in the U.S. The deployment, which builds on previous expansions, will make Schnucks the first grocer in the world to utilize AI-powered inventory management technology at scale.

The Tally device, also utilized by grocers such as Hyvee and Save Mart, traverses store aisles up to three times per day and autonomously captures on-shelf data including inventory position, price accuracy, and promotional execution.

By incorporating Simbe’s solution into chainwide operations, Schnucks said it will gain even greater visibility into store conditions, with deeper levels of business insights as the retailer prepares to adjust to the quickly-evolving landscape of a post-pandemic world.

Back end: At the distribution center
The Kroger Co. is partnering with intelligent automation technology provider Knapp to add 130,000-sq.-ft. of space and a new robotic fulfillment system to its Great Lakes Distribution Center in Delaware, Ohio. The site will use a combination of Knapp order, storage and retrieval (OSR) shuttles that deliver grocery cases in an exact sequence to robotic palletizers.

Kroger has been focusing on innovation in its distribution centers for several years. Since 2018, the company has been developing an automated “customer fulfillment center” (CFC) model with global online grocery retailer Ocado. Two CFCs are currently operational in Florida and Ohio, and Kroger plans to open 20 across the country in the next few years.

On the road: Mobile stores
A new technology being billed as the world’s “first store-hailing platform” promises to bring mobile stores to consumers in less than 10 minutes.

Robomart has launched a fleet of on-demand mobile mini-marts in West Hollywood, Calif. The concept works in a similar fashion to Uber in that consumers, using the proprietary Robomort app, can hail a mobile store to come to them and have it arrive at their chosen location in under 10 minutes. When it arrives, they open the doors (via the app) and handpick their own products.

Robomart allows consumers to view a list of all products in the Robomart app before hailing and then handpick their items when the vehicle arrives at their door – eliminating product selection error or out-of-stock items. It also features a proprietary RFID-based checkout-free system that allows users to take the selected products, place them in the bag and walk away – without physically checking out and paying.

‘Cyborgs’ – science fiction comes to life
The newest supply chain technology at Ahold Delhaize USA seems like something out of a comic book, but addresses a very real employee issue. Following successful pilots, the Ahold Delhaize supply chain network will scale up the use of artificial intelligence (AI)-based, wearable robotic technology designed to enhance the safety and effectiveness of distribution center associates.

Over the past year, the U.S. subsidiary of Netherlands-based grocery giant Ahold Delhaize has tested wearable Verve Motion robotic systems known as exosuits for millions of lifts of product. The Verve Motion device is designed to reduce strain on an associate’s back by 30-40% during a typical workday. Based on positive feedback from wearers, Ahold Delhaize will expand upon the pilot to include more than 250 suits in affiliated distribution centers.