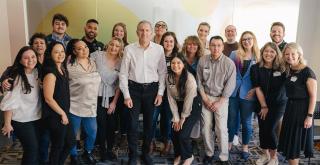 Starbucks is making major changes to its management structure.

Starbucks Corp. is shuffling its executive ranks, including the elimination of a C-level position.

As part of a broader reinvention plan, the coffee giant is phasing out the role of COO. Effective Oct. 3, 2022, current COO John Culver will move into an executive advisor role supporting the CEO to ensure a smooth transition, and then depart the company at the end of the calendar year.

The following executives are reporting to Britt as of Aug. 22, in his expanded role of Executive VP, Chief Strategy and Transformation Officer:

In addition, starting Oct. 3, Britt and the following Starbucks executives will report to Schultz as CEO for the interim, and will ultimately transition to reporting to the new CEO when that individual is fully in place:

“After 20 years with this incredible company, I am sincerely grateful for the many opportunities I have been given to impact Starbucks growth around the world and, in doing so, have a positive impact for the many partners I have served,” Culver said in a statement posted on the Starbucks corporate site.

In a separate statement on the Starbucks site. interim CEO Howard Schultz praised Culver and referred to the “reinvention” taking place at the retailer.

“I’ve relied on John Culver’s steady hand and operational excellence through his 20-year career at Starbucks,” said Schultz. “As he sets to depart the company, I remain indebted to him for his great success in directly shaping and enhancing the brand across every business and market where we operate around the world. Our reinvention requires us to rethink our leadership structure to create every opportunity for our new CEO and, most importantly, to accelerate delivery of modernized and elevated experiences for our green apron partners and our customers.”

Schultz also said the next Starbucks CEO will work “side by side with the leaders of the day-to-day running of the business.” In April 2022, Schultz, who previously served as CEO and chairman of the company, retook the reins of Starbucks on an interim basis. In a July 2022 letter to employees on the coffee giant’s corporate site, CEO Howard Schultz alluded to the company’s next chapter.

In the letter, Schultz said specific programs and initiatives regarding the company’s “next chapter” will be revealed in the weeks ahead. But they will be focused on areas that include the store and customer experiences, environmental sustainability and programs for employees.

Schultz said Starbucks’ reinvention will be guided by four principles:

• Safety, welcoming and kindness for its stores;

• Advancement and opportunity for its employees;

• Well-being for one another and its communities; and

In May 2022, Starbucks said it was investing $1 billion in new wage hikes, employee training and store innovation.