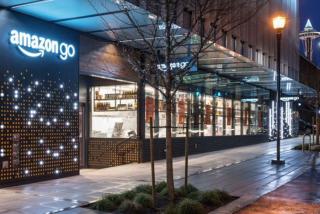 Barely a week after its second location opened its doors, Amazon Go has introduced its third store — and its biggest to date.

On Monday, the online giant opened its third cashier-less Amazon Go convenience store in its hometown of Seattle. The 2,100-sq.-ft. location, which was originally announced in January, is its largest store yet, reported Tech Crunch.

The new location will operate between 7 a.m. and 9 p.m. Monday through Friday, and between 9 a.m. and 6 p.m. on Saturday and Sunday. The store features ready-to-eat breakfast, lunch, dinner and snack items, and grocery essentials. It also features Amazon meal kits,

To shop the store, shoppers launch the Amazon Go app on their mobile device as they enter, and take the products they want off of store shelves. Amazon’s “walk out” technology automatically detects when products are taken off (or returned) to the shelves, and keeps track of them in a virtual cart. When customers are done shopping, they just leave the store.

Shortly after, they receive a digital receipt and their Amazon account is also charged for the order, according to Amazon’s website.

The e-retailer opened its first Amazon Go store to the public in January. Prior to that, it was open a year in a test mode exclusively to Amazon employees. The online giant opened its second location on Aug. 27, albeit it’s a smaller footprint that features a limited menu and shorter hours.

Amazon plans to expand the concept into other cities, including Chicago and San Francisco.

Eager to give Amazon a run for their money, other retailers are introducing their own cashierless concepts. For example, Walmart is launching a new Sam’s Club concept store that is focused on fresh foods and digital technology. The new 32,000 sq. ft., technology-driven store
location, which will set up shop in Dallas, will feature the company’s Scan & Go mobile self-checkout system, and digital signage. It will also feature fast membership sign-up process, along with self-serve returns, and same-day pickup and delivery options.
Advertisement