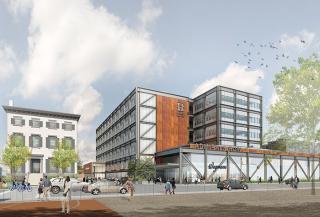 Wegmans Food Markets is coming to the Big Apple.

The family-owned grocer will make its long-awaited debut in New York City this fall, with a 74,000-sq.-ft. store at the Brooklyn Navy Yard, in the Admirals Row development. Wegmans Brooklyn will feature a second-floor mezzanine with nearly 100 seats for the in-store market café. The mezzanine space also has a bar that will serve food, wine, beer, and spirits.

Wegmans is also beginning its expansion into North Carolina this fall, opening a 104,000-sq.-ft. store in Raleigh. It will include a family-friendly, casual restaurant counter, called The Burger Bar, that serves burgers, salads, sandwiches, kids meals and more, along with beer and wine. Wegmans has announced plans to open four additional North Carolina stores in the future, in Chapel Hill, Wake Forest, and two sites in Cary.

Wegmans, which currently operates 98 stores in six states, will open a location in Virginia Beach this spring.
Advertisement