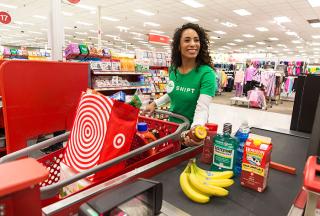 Target is leveraging its acquisition of Shipt to get online orders into the hands of New York customers faster.

On Thursday, the discounter announced that it is expanding its same-day shipping service through Shipt across stores in 10 regions within the greater New York City metro area. Customers will be able to order from more than 55,000 groceries, essentials, home, electronics, and toys, among other products.

After customers browse participating local retailers’ aisles online and make a purchase, Shipt’s army of ‘shoppers’ then take the orders, visit the stores to buy the products and deliver them to the user on the same day, usually within just a few hours. Shipt plans to hire 2,000 shoppers in the New York area to pick, fulfill and deliver orders.

New members who sign up before August 14 will receive an annual membership for $49 (the service typically costs $99).

Target’s newest expansion puts the company closer to its goal of offering same-day deliveries to a majority of stores in more than 40 states by the holiday season. At that point, the service will be available to 65% of U.S. households across 180 markets, reaching a total of 80 million households. In 2019, same-day delivery will expand to all major product categories at Target, the discounter reported.

“Same-day delivery was at the top of our list when we were thinking about ways to make shopping at Target even easier,” said John Mulligan, executive VP and COO, Target. “Shipt’s personalized, customer-focused approach fits perfectly with our commitment to deliver a convenient, exceptional experience.”