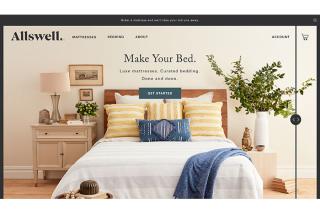 The chain unveiled a “design-centric” home brand, called Allswell, with its first collection made up of luxe mattresses and stylish bedding. And leaving little doubt as to the target audience, Walmart dubbed the line’s king-sized mattress the “Supreme Queen.”

Walmart announced Allswell the day after it announced plans to launch four new private apparel brands, online and in stores, starting on March 1

Allswell, part of the chain’s ongoing e-commerce strategy, is female helmed. Arlyn Davich, a successful entrepreneur with a decade of CEO experience, will serve as president, overseeing the brand’s launch, growth, and operations.

“Designed to give women the shopping experience they crave, Allswell provides a seamless digital experience for crafting a dream bed; from the optimal mattress to the perfect accent pillow and everything in between,” Walmart stated.

The collection, exclusively sold on the brand’s website (AllswellHome.com) includes two luxe mattress styles — “The Softer One” and “The Firmer One” — and four limited-edition bedding sets, or “Bedscapes.” The sets were created by “tastemakers” that include a host on HGTV, an interior designer and an influential blogger and women’s clothing designer. Each set embodies the tastemaker’s design aesthetic, according to Walmart.

With its new mattress offerings, Walmart follows in the footsteps of such other retailers as Target, West Elm and Pottery Barn, each of sell mattresses that are delivered in a box. The trend was pioneered by Casper, which, in addition to opening its own stores, has a partnership with Target.

Walmart said it came up with the name for the brand after extensive conversations with shoppers, especially women, about how they wanted to feel at home, particularly before resting their head on their pillow.

“We heard loud and clear that people craved the ability to feel that all is well in the world – both on the days when the stars aligned and through life’s tougher moments,” said Davich. “The name ‘Allswell’ embodies that philosophy.”

In addition to its best-in-class products, Allswell will offer top-notch customer service and support, the retailer said. Shoppers can choose between ground shipping and “white glove” delivery, with the option to have their old mattress hauled away at no additional cost.
Advertisement