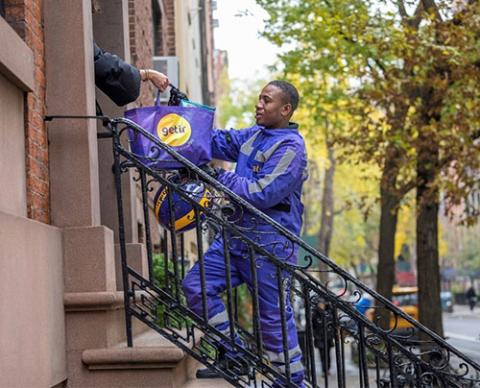 An ultra-fast global delivery company that is valued at $7.7 billion is now offering its 10-minute delivery service in three major U.S. metro regions.

Getir, founded in Turkey in 2015, recently debuted in the U.S. with the launch of operations in Chicago in November, followed by New York City in December. The company has now added Boston to its service area. Operating from 8 a.m. to midnight, Getir will be initially available in downtown Boston, with further expansion plans ahead.As an exclusive offer for the launch, Boston customers will not be charged a delivery fee for their first five orders.

Getir offers approximately 2,000 everyday items, including chocolate, water, dairy, cleaning materials, snack chips, and pet food, for delivery to customers within 10 minutes. The company, which operates throughout Turkey, has been expanding globally this year. It has launched operations in the U.K., the Netherlands, Germany, France, Spain, Italy and Portugal. The company has raised more $1.1 billion in funding during 2021, valuing it at $7.7 billion.

While ultrafast delivery services that fulfill orders in less than 15 minutes are nothing new, until 2021, in the U.S. they had mostly been offered on a highly localized basis by smaller platforms. But European fast delivery startup Gorillas, which fulfills online grocery orders in 10 minutes or less, debuted in Brooklyn at the end of May. And Philadelphia-based Gopuff, which provides speedy delivery (in as little as minutes) of immediate everyday needs, is expanding on the West Coast.

Days after Gorillas started U.S. operations in Brooklyn, Jokr, a new 15-minute delivery platform, launched in select areas of New York City, and has since initiated operations in Boston.

In addition, Buyk recently launched operations in Manhattan with a promise of fulfilling online and mobile orders in 15 minutes or less. Orders require no minimum spend and no delivery fee. New York-based Buyk plans to expand across all New York City boroughs by the end of 2021, and then expand operations in 2022 in the largest metro areas of the U.S.

Getir is entering the U.S. following several other successful international expansions across Europe, and is now operational in nine countries worldwide, with plans for further global growth. The company offers full-time positions, benefits, and employee status to drivers and packers.

Drivers are fully insured and provided with e-bikes and e-mopeds, as well as helmets and protective equipment. Additionally, drivers receive comprehensive training and safety courses.

“Following our successful launches in Chicago and New York, we are thrilled to start operating in Boston,” said Nazim Salur, founder of Getir. “We are very happy with the interest we received from our previous U.S. launches, and we are expecting the same from this new location. We offer best-in-class services and will continue our strong expansion plan throughout 2022. As the pioneer in ultrafast grocery deliveries, we are looking forward to introducing Getir to Boston residents.”