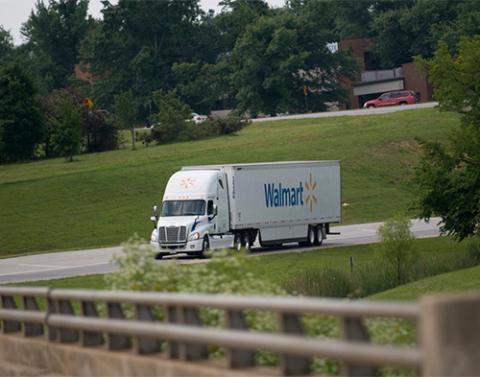 Walmart plans to pilot a variety of eco-friendly trucks as part of its strategy to reach zero emissions across its global operations by 2040.

To help achieve its goal, Walmart is expanding its transportation pilots and collaborations with manufacturers of electric, hydrogen and natural gas-powered vehicles.

“Many of these initiatives are first-of-their-kind for Walmart and will be pivotal in moving us towards a zero-emissions future, while being instructive to the entire transportation industry, “stated Fernando Cortes, senior VP, transportation, Walmart, in a post on the company’s website.  “To make a meaningful impact, we’re taking a meaningful approach by evaluating various attributes of three different fuel types: renewable natural gas, hydrogen and electric.”

The retailer noted it is piloting solutions not only for its over-the-road (OTR) trucks, but also for refrigerated trailers (also known as reefers) and yard trucks (which move trailers around in the lots).

Becoming a zero-emissions company won’t be as simple as adopting electric alternatives. For some vehicle classes, the solution might look like a hydrogen-fueled yard truck moving an electric refrigerated trailer, which eventually gets transported by a natural gas-powered truck. Our hope is that by testing and learning, we can find the right recipe to reduce greenhouse gas emissions and create a less impactful transportation fleet, all while still delivering the freshest food and goods to our customers.

Here are some details on Walmart’s new transportation initiatives.

Natural Gas
As it transitions away from diesel and moves towards a lower emissions fleet, Walmart plans to deploy and evaluate vehicles powered by compressed natural gas (CNG).

Starting early next year Walmart will be the first transportation company to receive Indiana-based Cummins’ new 15-liter natural gas engine, which will be added to few of its trucks.

The all-new engine is expected to deliver the same power and torque of a 15-liter diesel engine, but with significantly lower emissions, lighter weight and overall lower cost per mile than its diesel counterpart.  To maximize the potential emissions benefits of utilizing the technology, the retailer has secured agreements with Chevron to supply Walmart trucks with CNG linked to renewable natural gas.

Hydrogen
Although use of hydrogen is still in early development, Walmart is among the first to adopt it in its fleet, using it to fuel many of the forklifts across its grocery distribution centers.

In a few months, Walmart will be the first U.S. company to test Texas-based Capacity’s first second-generation hydrogen fuel cell yard truck. The truck boasts an operating time of up to 10 hours on a single refuel, faster refuel time and less dependence on the electric charging grid.

Electric
Walmart has been running zero-emissions electric yard trucks in its distribution centers during the last year and have found they provide approximately a 50% emissions reduction compared to diesel trucks. The company said it willcontinue working to pair the trucks with renewable energy said wind, solar, or hydro powers in order to achieve a true 100% emission reduction.

The chain also sees an opportunity to power its refrigerated trailers with electric energy. It recently worked with Thermo King to haul Walmart’s first-ever refrigerated trailer operated on battery electricity in the U.S. The trailer is designed to run on 100% electricity until the batteries are fully depleted.  If the electricity is depleted mid-haul, the refrigeration unit cuts over to diesel.  During the two-month trial, Walmart ran 18 routes hauling groceries between its distribution center in Shafter, Calif., and stores in the surrounding areas.

“We’re pleased to share that throughout the entirety of the pilot, the trailer ran on electricity 83% of the time,” the company said.

Later this summer, Walmart will run a battery-electric day cab proof-of-concept with Freightliner’s eCascadia and Nikola’s Tre BEV out of a distribution center in Fontana, Calif.  The electric day cabs will pick up loads from suppliers and deliver them to a consolidation center in the area.

“Short-range deliveries such as these are a great use case for electric trucks, and we’re excited to be among the first to test them in our operations,” Walmart noted.

“Becoming a zero-emissions company won’t be as simple as adopting electric alternatives,” said Cortes. “For some vehicle classes, the solution might look like a hydrogen-fueled yard truck moving an electric refrigerated trailer, which eventually gets transported by a natural gas-powered truck. Our hope is that by testing and learning, we can find the right recipe to reduce greenhouse gas emissions and create a less impactful transportation fleet, all while still delivering the freshest food and goods to our customers.”