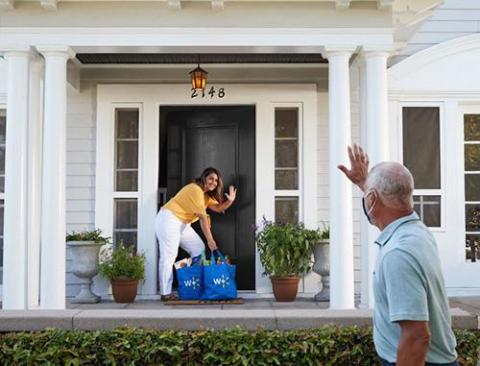 Members of the Walmart+ program will now receive free access to the “essential” tier of the Paramount+ subscription streaming offering. The subscription typically costs $4.99 per month and includes some paid advertisements. (The premium, non-ad-supported version of Paramount+ normally costs $9.99 per month.)

The available Paramount+ content will range from original dramas such as "1883" and "Star Trek: Strange New Worlds," to the popular preschool franchise, "PAW Patrol," to recent blockbuster films such as "Sonic the Hedgehog 2," to live sports.

Paramount Global has publicly estimated that Paramount+ has 43 million total members, and has said it wants to have 100 million subscribers by 2024. Walmart does not publicly release Walmart+ membership numbers, but Consumer Intelligence Research partners estimated the service had 11 million participants as of July 2022.

"We know Walmart+ is providing members real value in their every day – from grocery shopping to filling up their tank and more,” said Chris Cracchiolo, senior vice president and general manager of Walmart+. “With the addition of Paramount+, we are demonstrating our unique ability to help members save even more and live better by delivering entertainment for less, too. Eighty-five percent of U.S. households use streaming services1 and Paramount+ has the premium content and broad appeal that our members are looking for – like Walmart, they have something for everyone. We’re excited about the launch and what comes next for Walmart+.”

“Paramount has enjoyed a close relationship with Walmart for years, and Walmart customers connect with Paramount's beloved brands, content, and characters every day through a range of consumer products available throughout Walmart stores," said Jeff Shultz, chief strategy officer and chief business development officer, Paramount Streaming. “Now, pairing Walmart’s expansive reach across the country with Paramount+'s broad and popular content that offers something for everyone is a unique opportunity to expand our partnership. Together we will bring Walmart+ members the full breadth of Paramount+ programming.”

Walmart has been bulking up Walmart+, initially launched in September 2020, with several different promotions in the past year. In March 2022, Walmart made the program available free to all full- and part-time Walmart U.S. associates working in the company’s stores, distribution centers and fulfillment centers. This added nearly 1.6 million members to the offering.

In addition, in July 2022, the discount giant began making its InHome delivery service, which delivers groceries straight to a customer’s kitchen or garage fridge, available as an optional add-on within the Walmart+ program for $10 less than previous annual pricing when Walmart+ and InHome were separate memberships.What were previously two standalone memberships are now combined as a single, streamlined offering.

And during the month of August, eligible consumers who spend $300 or more on a single purchase with the buy now pay later (BNPL) solution Affirm at Walmart, either in-store or online, will receive a free 90-day Walmart+ membership. Members of the Walmart+ program, which normally costs $12.95 a month/$98 a year, receive exclusive benefits such as free shipping with no order minimum, free delivery from stores, and discounted gas prices.

Based in Bentonville, Ark., Walmart Inc. operates more than 10,500 stores and clubs under 46 banners in 24 countries and e-commerce websites.