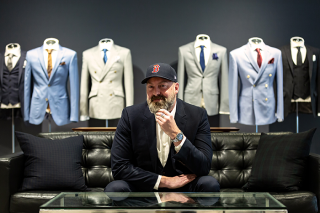 Just in time for spring training, digitally native menswear brand Indochino announced that it is the official made to measure brand of the Boston Red Sox as it opens its second location in Beantown.

The 2,234-sq.-ft. showroom opens in the Seaport district this week and will offer a personalized experience where customers are paired with a "style guide" to help design their own suits, shirts, blazers, chinos and overcoats. Finished garments are delivered in two weeks.

The partnership will see Indochino featured in a series of prominent activations both at Fenway Park and in Indochino showrooms, as well as via Red Sox digital and social channels.

“We see our collaboration with [the Red Sox] as a tribute to the city of Boston, and to further revolutionize how Bostonian’s shop for clothing for generations to come,” said Drew Green, president and CEO of Indochino.

The original Boston location opened at 85 Newbury Street in the summer of 2015. Green said that Indochino’s Boston-based customer base has grown by 400% since it opened.
Advertisement